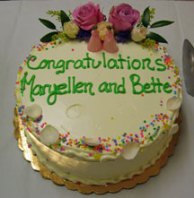 We had a party today at work to celebrate a very happy day: the marriage of one of our colleagues to her partner. They’ve been together for 16 years and have known each other for almost 40 years, and this day was less about white lace and frills than a legal binding of a love and commitment that were already rock solid. I’m so happy for them that they live in the only state in the country where they can legally get married. They’ve proven the depth of their relationship and believe me, it’s a lot stronger than many straight couples couples who marry in a big frothy ceremony only to divorce two years later.

Our governor has been busy flying around the country talking to the Red States that he is courting in his upcoming presidential bid, and a key issue is same-sex marriage. Everyone else outside of the state seems to be focused on stomping it out as though it’s some sort of infectious disease.  But here in Massachusetts, where same-sex marriage has been legal for two years, the world has not fallen apart.  Heterosexual marriages don’t seem to be failing any faster than they did before.  In fact, only the Catholic Church and some politicians are having problems.

Regular people, though, are doing just fine. Gay couples are getting married and the right to be by each other’s side going through their lives.  I don’t feel threatened by it at all, just relieved that so many people I care about can finally have the same legal rights as those who take those rights for granted.  Today I celebrated with two of them.

One thought on “Wedding bells”