My parents are visiting and I’ve been paying particularly close attention to the way they handle their food. My dad has always been a little plump and has battled his weight ever since I can remember. My mom, on the other hand, is a tiny size 8, down from the size 10 she wore when she got married. Dad says that in the 56 years they’ve been married, she’s only varied about 4 pounds from her current weight except during pregnancy.

I, on the other hand, can vary 4 pounds in a week if I’m not careful. So I’ve been observing how she eats and approaches her food, not to judge or complain that we’re different, but almost as an anthropologist would study a different culture. It’s been interesting. 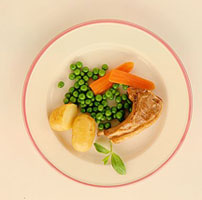 She eats a small breakfast with dairy (usually yogurt), fruit and natural fiber. Usually Mom makes her own bran muffins and has one with a little carton of yogurt. But at my house she’s having steelcut oatmeal with half a banana and a little milk, eating slowly from a small bowl that’s full and putting her spoon down between bites. I don’t know if she’s always done this but I can see that it’s a factor that lets her eat less and spread it out until she’s really satisfied.

Lunch is usually a half a sandwich on low-cal wheat bread and about 2 oz of protein, with a sliced apple and maybe a cookie for dessert. She eats slowly, the food nicely arranged on a small plate, while seated at the table. Unlike her daughter, she eats all her meals at the table with an occasional sandwich outside on the patio. I, on the other hand, eat mine in the recliner with my feet up.

For dinner, she mostly prepares simple meals balanced with unfussy protein, vegetables, and half a potato or sweet potato. And maybe there a small ramekin of low-fat ice cream for dessert, eaten with a small spoon.

That’s it. Simple food, small portions, served on smaller dishes and eaten slowly at a table with almost no snacking. Mom drinks water and her evening glasses of wine but no soda, goes for regular short walks, and gets plenty of sleep. When she eats out for one meal, she cuts back on what she has for the next so they balance out.

She doesn’t sit around and obsess or lament about the things she cannot eat; she can eat anything she wants but makes choices that let her enjoy flavors and foods in a sensible way. And she doesn’t act or talk as though she’s deprived, she simply does the next thing.

Mom does the things that we talk about in Weight Watchers and I’ve heard about for years in behavior modification programs. She doesn’t talk or complain, she just does it and moves on. I think there is a lot for me to learn and emulate here.

7 thoughts on “Watching My Mother Eat”