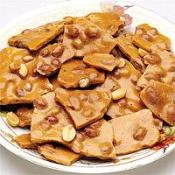 When I am stressed, I eat. I have a difficult conversation coming up with someone that I’ve already had to put off several times – for good reasons, mind you, but the delay is just making me more stressed. Though the Friday and Saturday snow days were really a treat and did rest my spirit some. And I had those scones at home already.

My food is complicated by the fact that I’m going away on Thursday for a few days in Chicago. Part of my pre-travel eating involves making sure I don’t have food going bad in the fridge so I’ve learned to be very careful about buying fresh foods or making copious quantities of food I won’t be here to eat.

This doesn’t excuse buying peanut brittle or eating the whole box, though it did take me 3 days to do it. I love peanut brittle and haven’t had it in a million years. It’s nothing but pure sugar with some nuts which is why it’s so yummy. And will rot my teeth. Good thing I finished up all the decent size pieces – those little nibbly bits with peanuts got tossed.

For a brief minute this morning I contemplated signing up for a trip to China next fall (until I woke up and realized that it was too much money for something I never really thought about doing and can’t afford to do anyway). But I do admit that one bit that loomed large was the problem of stuffing myself into a plane seat to fly for some 24 hours to get there in the first place. I drank water while I contemplated rather than eat sugar. And I decided not to go, but not because of the plane part.

I admit, though, that I really hope the conversation happens tomorrow so I can move on. I have WW tomorrow night after work and before packing which should help me see the consequences of my stress eating and wipe the slate clean before the trip.

Thanks for your concern about my foot and my knee. I don’t think anything is broken or infected – I’ve had these pains before and did some research. The foot is probably because of pronation and the need to wear my orthotics to keep the foot properly aligned. The knee pain is the result of degenerative joint disease and the joint warmth and stiffness are a result, especially after overdoing. Or walking funny because the foot hurt. Or both. In any case, I see my primary care doctor a week from today for a physical and both will be on my discussion list.

Back to American Idol. The boys are singing tonight and the pitch problems are driving me crazy. I would much rather listen and critique than imagine being up there singing but still, it’s entertaining even when it hurts the ears.