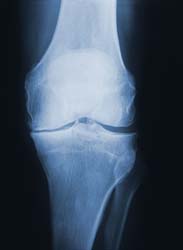 They’re worse than I thought. My knees, I mean. And I didn’t think they were all that good in the first place. At least now I understand why a bit more.

I had my initial visit with the new ortho people, a year after my last consult in Boston with the surgeon who worked on both knees and treated me over a 12 year period. My last MRI’s, carefully lugged in on the bus and carried over in my hot little hands, were pretty worthless because they are 2 years old and the right knee had surgery after the imaging was done. But still, as an academic background, they were useful.

What he wanted to see were weight-bearing x-rays, showing how the joints look when they’re in action. One look at those and he said, no wonder it hurts so much. There’s this little space in the joint where the meniscus is, and in a healthy joint, it’s the same width all the way along. Mine looked like it was pitched cockeyed, with the bones touching on the medial (inside) part and the normal spacing on the lateral (outside) part. The ends of the bones were ground down without the nice rounded edges they are supposed to have. The right knee was considerably worse than the left, and the left isn’t going to win any prizes.

So, what to do. I have a referral to a joint replacement specialist – not to schedule surgery just yet, but to talk about long-term and short-term options. Eventually there will be a double knee replacement in my future (I do, after all, have my father’s knees and he’s already done it). Losing weight will ease the load on the joint but the damage is already done, between wear and tear of weight bearing over many years + arthritis + degenerative joint disease. Lucky me.

I also have some inserts to put into my walking shoes instead of the orthotics I’ve used for years. It seems that they correct my pronation, alright, but that actually pushes the knee in the wrong direction. Maybe years ago it would have helped – and actually, I think it did – but now that simply pushes the already tight joint into more bone-on-bone grinding. The new inserts will push the leg the other way, hopefully opening up that little cushion space enough to feel some relief.

Of course there’s the other problem that I have arthritic feet. God, it’s hard being old. When I lace on the walking shoes, the lacing presses right on the top of my foot which is where the arthritis is. The next joint down is where the shoe bends when you walk, and that presses on an even worse little arthritic space. So wearing the good for me healthy shoes actually can case more pain than not wearing them at all. The orthopedist described my pain accurately as though someone stuck a knitting needle in my foot and then ran a rolling pin over it. Yeah, that’s it. I want to avoid this at all costs.

So I’m going to have to think about managing the insert thing to help my knee with the foot and shoes issues. It’s not possible to use inserts in my adorable Birkenstock pink sandals. Which I wore today and plan to wear again tomorrow.

Are we having fun yet? That’s what I thought.

5 thoughts on “My knees are crumbling away”