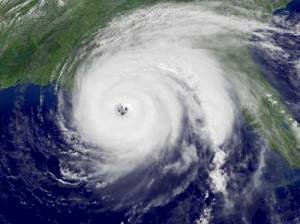 When bad weather threatens, I turn to the Weather Channel and poor Jim Cantore who always goes into the thick of blizzards and hurricanes, especially, to track the storm and see what’s happening.  Last night and this morning my attention is on Hurricane Ike, which made landfall last night near Galveston.

My family lives in Texas; my brother is in Houston.  When Hurricane Rita came in 2005, they evacuated along with much of the city, but this time they stayed put. Actually, I believe that was the recommendation from the city.  But I thought it was foolish.  We don’t get advised to leave when a blizzard is coming, but if a hurricane headed anywhere near me and officials told me to leave, I’d probably already be on the road with a loaded car and unhappy cat.

It makes me mad that so many people stayed in Galveston, especially (given the historic catastrophic disaster of the 1900 hurricane and its low-lying sea level).  After the mess of Katrina, seeing what happened to people who stayed behind and either died or needed rescuing amid the wreckage of buildings, why didn’t these Galveston people leave?  Did they think they were immune to the force of the storm?  What part of “If you stay behind and want to be rescued during the storm, we will not be able to respond” did they not understand?

My brother stayed in Houston (and granted, his home isn’t close to the coast and not all that close to water).  Last night they grilled out in the backyard and watched football.  He called me from his truck on the way back from a quick trip to a convenience store (one of the only places open) because he said they needed ice cream.  But really he just wanted to be out and seeing what it was like on the deserted streets.  The bad weather hadn’t hit then.

Now it’s morning and I wonder what his situation is.  Does he have power?  Did windows blow out, or the new roof get ripped off?  Or is he sitting there having his coffee and planning his day?  I hope they’re okay and will wait for the promised phone call to tell me about it.  Assuming the cell phone towers didn’t get blown over and he can still connect.  We’ll see.

UPDATE: Talked to my brother who said it had been a long, loud, nasty night. They have no damage and no flooding where they are, but also no power and very low water pressure.  I gave him info on the storm damage in Galveston and Houston – he had no information. Plans are for them to load up the truck and head up to the ranch with a chainsaw in the back to cut downed trees in the way.  I hope he doesn’t; hurricane force winds are still blowing.  We’ll see.

The parents in Tyler are expecting the eye to go directly over them. When we talked, they said the wind had picked up considerably and the sky was black.  Rain was expected momentarily. Mom is well organized and has clean clothes, plenty of canned food and water.  Told her to charge up the cell phone in case the towers don’t go down when they lose their regular power.