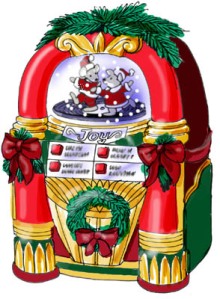 Maybe it was the fruitcake baking that got me into the Christmas spirit.  No, actually it was Pandora Radio‘s holiday genre stations — folk holiday, jazz holiday, rock holiday, etc.  If you haven’t joined the Pandora band wagon, do it today – lots of music you never heard of but love when you hear.  About two weeks ago I started to hum and then burst into little bits of Christmas carols while  at the computer, then in the car, then puttering around the house.   Out shopping, I find my eyes meeting those of other shoppers as we sing along with the piped in music, and we smile.

Since I’m traveling for Christmas this year, I decided not to put a tree up.  There’s sadness in that, because I love my ornaments and the stories they tell me about people and places from years past.  But it just doesn’t make sense to put up a tree for 2 weeks only to go away for a week – and I don’t want to leave it up when I’m gone to be a temptation for the kitty to cause havoc.

But I do have other Christmas things and today I dragged them out of my green and red plastic storage bins (color coded so I remember that’s where the Christmas stuff lives off-season).  I didn’t go crazy, those days are past.  But I have my large gourd-Santa that came from the Arts Festival in Park City, UT years ago.  My Spanish nativity scene bought in my college days, with the fuzzy sheep that are losing legs, shepherds with broken arms, and kind of nicked kings.  At 34 years old, they are a beloved part of my holiday.

Then there is a small gate with fake snow and greenery that’s a prop between some of my Byer’s Choice carolers.  I have four – 2 parents and 2 kids, representing my family of origin – but only put up the kids this year.   A red sleigh stands ready to hold Christmas cards, with a ceramic snowman sitting next to it, a gift from a Boston colleague years ago.  On the dining table are a red placemat with a glass bowl holding red and silver ornaments.  My door is decorated with a quilted stocking featuring a Santa face – just in case visitors don’t know what season we’re in.

The only Christmasy thing in the kitchen is a stained glass Christmas tree with presents underneath, standing on the window sill to catch the light that mostly I won’t see because I’m at work during the day.  But still, it’s tradition.  So is sending out cards, even though the number I’m sending now is very pared down.  I’ve weeded out some people from my distant past this year but there are still people I only really communicate with at Christmas – tho by including blog, Flickr and FaceBook information, the chances are good that even that small number will decrease by next year.

One thing I’m not doing is really shopping for presents and that feels just fine.  I’m not really finding anyone getting into presents as much this year, but then, most of us either are single or have older children.  There’s a peace in not getting frantic about it.