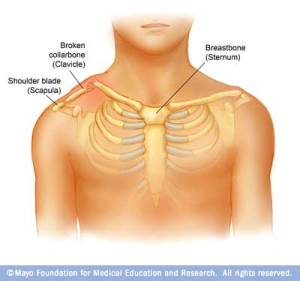 I’m telling people it was a football injury but we all know that I don’t play football and am not very athletic.  I’m terrified of falling and breaking something, but it didn’t happen with a fall, either.  In fact, I’m not sure HOW I did this.  My medical degree is from Wikipedia, which doesn’t count for much.

What I do know is that I came home from my Texas trip feeling fine but soon after I got home, the right shoulder area started hurting.  Sleeping was hard, and it hurt more and more the next day.  Being a smart girl, I took myself to my health plan’s Urgent Care center on Tuesday, after waiting for Peapod to lug in heavy bags of groceries – which proved to be a very good plan.

Urgent Care is urgent in name only, not in speed, but it’s better than an ER.  When they finally saw me, they poked and prodded and kept asking, “does it hurt here? how about there?” before sending me down for x-rays.  I had on one of those cute little gowns that ties in the back only I couldn’t tie it because I couldn’t lift my arm enough.  In fact, I couldn’t lift or turn it much at all.

After the x-rays, the doctor told the nurse to put me in a sling and I’m thinking, huh?  I’ve never used a sling before; crutches, yes, but not a sling.  The doc said that on all the films, there was a clear line showing in the clavicle.  It’s in the right place to match the pain.  There’s nothing really you can do about it, just wear a sling for weeks, rest it (no shoveling – not good for me in January here in New England), put ice on it when it hurts, take an OTC anti-inflammatory to help with swelling, and if needed, take something for pain control before bed since it’s hard to find a comfortable way to sleep.

How did I break it?  I have no clue.  The doctor suggested maybe lugging suitcases around, since I had just returned from a trip, and it does make sense in terms of timing – but I’ve lugged suitcases and a lot of other heavy stuff before and never did anything like this.  Since I’m not in terrible pain unless I’m trying to do something stupid with the arm, I’m hoping it’s just a crack and not a full-blown fracture.  I wish my bra strap didn’t come directly over the sore place, but I’m not going out to the office without one, so I’ll just deal.

As long as the arm is supported (which it is while seated in a nice recliner in the living room), there’s no need for the sling and I can type with two hands.  It’s harder in the office because the support isn’t the same – but it’s really hard to use the mouse with the left hand.   Hmmm, maybe I can get the IT guys to move a few things around for me.  I’m getting some furniture changes, including a new keyboard tray, so maybe the arm support will be better soon.

In the meantime, the kitty and I are hanging out and enjoying the last bits of the holiday week.  It’s back to normal on Monday.