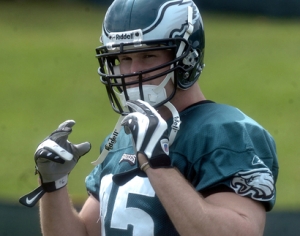 This week was BIG for professional football.  After weeks of summer training camps and four weeks of pre-season games, all NFL teams had to cut their 80-man training roster down to 53 for the football season.

Rob signed with the Eagles at the very end of the training camp period and five days later was playing in the first pre-season game against the New England Patriots, featuring QB Tom Brady’s return after missing almost all of last season.  It was memorable.  He played in all 4 games, had a groin pull, but recovered nicely and played last week at tight end and special teams.

On Tuesday the Eagles cut down from 80 to 75 players, and yesterday they, and all other teams, cut down to 53.  Rob got the call yesterday that he was on waivers, but today was one of 4 players signed to the Eagles practice squad.  There will be 8 on the squad by Monday, I think, but we are excited, proud and relieved that his time as an NFL player will continue.  It’s just awesome.

My parents and I have learned way more than we ever thought we’d care to know about football and know we’ll continue to learn more.  I know that the practice squad, well, practices with the 1st string players as they prepare for the next week’s game.  If anyone gets injured, they can call up a practice guy to play in the game.  Mostly I know this is a real job and Rob is living his dream.  One of his friends from training camp was also signed to the practice squad, and they’re talking about getting an apartment together.  They’re both from Texas and their sisters know each other at college, so we’re practically related.

What this all tells me is that if you have dreams, make them goals, break them down into small steps and take them one by one until you can look back and say, wow, I really did get here. What seemed insurmountable is accomplished one step at a time.

Yayyyyy, Robo!  I’m proud of and excited for you for working your butt off and taking advantage of every opportunity to live your dream.

3 thoughts on “Rob is on the Eagles Practice Squad!”