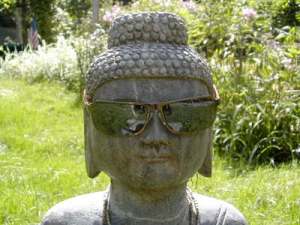 The title of this post makes no sense, since drains are not connected to eyes, but the song has been running through my head since my last doctor’s appointment.

My drains were finally removed last week, five weeks and one day after my surgery.  I knew that one would come out but the other still was collecting fluid and I was pretty sure the doctor would keep it in another week.  Turns out, thought, that five weeks is long enough and way longer than most people have them in, so out they came.  Freedom!

No drains meant I could finally take a shower for the first time since surgery morning, and it was the best shower of my life.  How fabulous to be able to really wash everything in one place without dripping all over the floor and everywhere else!  I felt so clean and normal afterwards, and I know my work colleagues were happy 🙂

Over the next week, though, fluid was building up inside the belly near the incision.  The doctor had told me this was very common after drain removal, and that I would know it was too much if I could push in one spot and see waves in other parts of the belly area.  That sounded so weird I couldn’t conceive of it.  But I did, and it was weird.  it was also uncomfortable and felt very “full”, especially with the compression binder still on.  As though I’d overeaten even when I hadn’t had anything at all.

So I called and got a same-day appointment to have the fluid aspirated out.  Think of having blood drawn, when they change the little vials to get more blood for different tests.  That’s what they did to me, but instead of vials they used what looked like turkey basters (without the bulbs), and pulled out almost a cup of fluid.  The incision area is still numb so it didn’t hurt, it just felt odd.  But it’s definitely better now.

I still have a lot of swelling, especially in my upper thighs, and from the front I look a lot like Jane Curtain in the old SNL sketch of The Widettes, who have ginormous thighs and butts.  Well, okay, it’s not that bad, but it’s a lot lumpier than it was before.  I know it’s from surgical swelling and from the abdominal binder (when you compress something, bits squeeze out both ends – it has to go somewhere).  It will go away.

In the meantime, my tummy is still very flat and I’m enjoying the concept of having a lap.  Did you know that laptops actually work better when they are, um, on top of a lap?  Instead of a pillow carefully positioned to slant the device over the belly rolls.  It’s a novel concept in my house.

Work has been crazy busy.  We’ve been interviewing for a brand new professional position and as a member of the search committee, at least half of every interview day was taken up with something, sprinkled through the day.  Multiply that times four and you can see that not much was going on.  I contemplated going in on the weekend for a few hours just to get some projects in place for my staff, but decided “nah” and will enjoy the weekend in peace at home.  After errands and, um, writing a “welcome to the conference” piece for the annual meeting’s final program booklet.  I seem to work best against a deadline.

5 thoughts on “I Can See Clearly Now, the Drains are Gone”