There are winners and losers in an election. That’s just the way it works, the way it has always worked. The person with the most votes wins. Sometimes that person is the one you wanted and sometimes it’s not. But wishing won’t change the reality.

I’ve lost races before. We all have. We didn’t get elected to the student council or officer in an association – or elected to Congress or president. It’s just not possible for everyone to win. And I grew up in an America where, if you didn’t win, you conceded defeat gracefully (if not happily) and stepped aside for the winner to take the spot you wanted for yourself. You looked at what worked and what didn’t and decided whether or not to try again. You let go and moved on.

But the idea of simply saying you won’t accept the result of an election unless you win is an alien concept. Everyone can’t win. That’s not how this works. That’s not how any of this works. Sometimes you just lose because more people vote for the other person, even if you don’t understand or like that they did.

In this midterm election we find candidate after candidate already anouncing that they would not admit defeat, that losing a race automatically means there is fraud or irregularity because of COURSE they would win.

Losing is a bitter pill, and the higher the office, the harder that pill is to swallow for both the candidate and their followers. There have been many elections where the person I supported lost and I had to simply accept it even while seething at the jubilation of the winning side. But those losing candidates understood that two people can’t win the same race for a single spot. One of them wins, the other loses.

I’m afraid for our country. I’m afraid of the hatred and vitriol that I see spilling out of political ads and news broadcasts. And I’m afraid of the same words hurled by neighbor against neighbor when they hold different positions. More people are so full of anger and pent up violence, and more of them have guns and the freedom to carry and use them. That doesn’t make me feel more secure; it makes me more afraid that innocents will be shot because they were in the wrong place at the wrong time. We live in a climate of violence all the time now and it’s going to erupt in dangerous ways. I’m afraid of what’s coming.

Tensions are high in America on this July 4th. The country is polarized politically, economically, racially, socially, and every -ly in the book, and social media and 24/7 news cycles on cable news just escalate words into sound bites that warp and explode as they move through society.

I live in East Texas, a very conservative Republican place that believes in God, guns, white nationalism, President Trump, and that Coronavirus is a hoax blown out of proportion by liberal Democrats and lying media. Although our governor has issued an executive order to wear masks, my neighbors are vowing not do so.

And so I’m hiding at home. I feel like a fish out of water here in this cherry pie red place, or rather, a tiny blueberry in the middle of the endless sea of red. I feel impotent to speak here, to defend myself and beliefs that differ from that of the majority. No one would listen anyway once they know I’m a Democrat. Wait, they would listen and then attack me and talk about me and my stupidity while they polish their guns, eat BBQ, and plan for Trump’s re-election.

I’m afraid for my country. I’m afraid of my neighbors. I’m afraid of getting the virus and giving it to someone else – not of my own risk, which is actually higher because of my age, weight, and recent sinus surgery. I’m afraid the country will tear itself apart. We survived a Civil War but it didn’t solve anything. What will happen this time?

My ancestors fought for the Confederacy – and for the Union. I’ve lived in Virginia, with Confederate statues everywhere. I never really understood why we had statues to people who LOST the war. Germany doesn’t have monuments to Nazis; why should we have them for those who rebelled and lost? Why name schools and military bases and streets for them? I can be proud of my family and my history and NOT proud of what they fought for. I don’t understand why so many are holding on so hard.

But I sit silent because I’m a weenie. I know what I believe but I’m afraid of being overwhelmed and rejected. So I watch “Hamilton” on my own, keeping silent, keeping watch.

I am afraid of what’s coming.

Were you shocked by the Tucson shootings last Saturday?  I wasn’t.  I’ve been expecting some kind of violent eruption since the last election and to be honest, I thought it would be Obama who was shot first.  He’s gotten more than the usual share of death threats because he is Black, because the economy tanked and jobs lost – and because so many people are angry at the world and he is the president and epitomizes The Powers That Be.

The Tucson shootings captured and emotionally entangled me. I was obsessive in looking at more information, more analysis, more ideas to explain what I saw and heard.  It actually reminded me of my reactions to 9/11, and not in a healthy way.

All of the articles, stories, reports, videos, analysis, and prostrations didn’t help.  One article quotes another until they go in a single giant chain of links connecting one to the other.  And they didn’t change the innocent people who were dead, and the assassination attempt on Gabrielle Giffords.   The left blamed the right, the right blamed the left, and talk show hosts decried any responsibility for anything.  Sarah Palin – well, don’t get me started there.

The problem is way bigger than why that particular mentally disturbed armed man managed to kill so many people at the grocery store – and there is plenty going on with THAT that will be dissected as we move on from here, hopefully not just with one party blaming the other.

Politicians and journalists analyzed and told us every single word, phrase, action, reaction, turn of the head, tone of voice, things done and things left undone until my head was full of words swimming in a big stew.  Our country is deeply angry at just about everything and looking for people to punish, and I’m afraid there will be a lot more violence and destruction before we get to a different place.

I don’t know how to change it and find that I isolate and just take care of myself (food, exercise, sleep).  More seems too much to deal with.  It’s not depression; I know what that feels like.  It’s more like chaos that’s too big to break down into pieces small enough to grab.  Though if my congresswoman has a meet and greet event in my area, I’ll definitely be there.

And in the meantime, I shovel.  We got over 2 feet of snow today.

Obama spoke at the memorial service in Tucson not long after I wrote this, and I listened with tears in my eyes and a sense of peace and calm.  His words were Big and not Inflammatory or Partisan.  That’s what needed to be said, and what I needed to hear.  Thank you, Mr. President.

Abstract:  If you live in Massachusetts tomorrow, vote tomorrow and be sure it’s for Martha Coakley.  Anne expounds on national political parties.

In case you hadn’t heard, tomorrow is election day in Massachusetts to fill the Senate seat vacated by the late Teddy Kennedy.  The seat has been Democrat for as long as I’ve been alive, almost all of that time held by Teddy.  My Republican family hated him but I didn’t, and was proud and pleased to have voted for him during my years in Boston.  He was a good man and worked hard for the country and for the people of his state.  His loss is huge, especially in this year of health care reform.

I know not everyone likes the plan coming out of the Senate (my family certainly doesn’t).  It’s not perfect by a long shot but with so many people without any health care at all, it’s important.  The Kennedy vote matters if this is going to pass, even if Kennedy isn’t the one to cast it this time.

So the election tomorrow is crucial.  I completely support Martha Coakley for the position and wish I still lived in Massachusetts so I could vote for her.  Her opponent doesn’t pay health care costs for his current employees and has vowed to be the 41st vote against the health care bill if elected and sworn in by the time it comes to a vote.

Don’t get me wrong.  I’m not an “everything must be the Democrat way or the world will come to an end.”  Yes, I am a political liberal.  But I’m also a realist and watching the Congress just tires me out and makes me want to clean house of both parties.  All they do is wrangle for votes and do their best to make the other party fail or at least be ineffective.  Votes are stalled.  Nominees are held up for months or longer, leaving key positions vacant rather than let the government and judiciary run efficiently.  Both parties are wrong for doing this; they don’t help anything except making themselves look strong and purposeful even when they really look stupid.

I want health care to pass and move to the implementation stage so the Congress can actually pay attention to some of the other huge issues facing our country, including how to create jobs, fight two wars, provide long-term aid to quake devastated Haiti, and a thousand and one other things.  I don’t expect it will happen.  The Republicans want Obama to fail and the Democrats to be swept out in the mid-term elections.  The  Democrats want to save themselves their seats and to try and do as much as they can before the Republicans take over again.

Just think of what we could accomplish if the parties actually worked together instead. 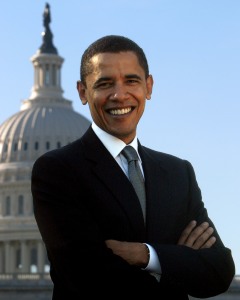 President Barack Obama.  It has a nice ring to it — and I’m so glad we have at least 4 years to say it.

In my part of the world, at least, no one got any work done.  I have some friends who made the trip to DC to be part of the (freezing cold) crowd but I was content to stay warm and watch on screen.  People watched in movie theaters, in auditoriums, on giant TVs in public places and streaming live on the web from our desktops.

I watched and listened on CNN and Facebook, which let me share comments with my friends while we shared the experience of the music, the words, the faces, the hope, the promise of change.  I admit having the Chief Justice, and then Obama, mangle the oath of office was distracting but never mind that.  It was just one part of a bigger whole.

And I was intrigued by small things:  the way 95 movers worked for 5 hours to whisk out the Bush’s belongings, and moving in and unpacking the Obama’s, all while they were at the swearing in and assorted Inaugural events.  Painting and transforming the Oval Office.  The White House website changing as soon as the oath was taken.  Sasha and Malia skipping up close to see their dad become president.

My family in Texas said it was just another day; no one was particularly interested in the inauguration, which makes sense since they didn’t vote for the new president.  We, however, did – and the enthusiasm that flowered during the campaign just settled into a big happy glow today.