There are winners and losers in an election. That’s just the way it works, the way it has always worked. The person with the most votes wins. Sometimes that person is the one you wanted and sometimes it’s not. But wishing won’t change the reality.

I’ve lost races before. We all have. We didn’t get elected to the student council or officer in an association – or elected to Congress or president. It’s just not possible for everyone to win. And I grew up in an America where, if you didn’t win, you conceded defeat gracefully (if not happily) and stepped aside for the winner to take the spot you wanted for yourself. You looked at what worked and what didn’t and decided whether or not to try again. You let go and moved on.

But the idea of simply saying you won’t accept the result of an election unless you win is an alien concept. Everyone can’t win. That’s not how this works. That’s not how any of this works. Sometimes you just lose because more people vote for the other person, even if you don’t understand or like that they did.

In this midterm election we find candidate after candidate already anouncing that they would not admit defeat, that losing a race automatically means there is fraud or irregularity because of COURSE they would win.

Losing is a bitter pill, and the higher the office, the harder that pill is to swallow for both the candidate and their followers. There have been many elections where the person I supported lost and I had to simply accept it even while seething at the jubilation of the winning side. But those losing candidates understood that two people can’t win the same race for a single spot. One of them wins, the other loses.

I’m afraid for our country. I’m afraid of the hatred and vitriol that I see spilling out of political ads and news broadcasts. And I’m afraid of the same words hurled by neighbor against neighbor when they hold different positions. More people are so full of anger and pent up violence, and more of them have guns and the freedom to carry and use them. That doesn’t make me feel more secure; it makes me more afraid that innocents will be shot because they were in the wrong place at the wrong time. We live in a climate of violence all the time now and it’s going to erupt in dangerous ways. I’m afraid of what’s coming.

It’s important. No matter what your politics, which candidate(s) you support — go vote. Bring a book or an iPod and wait in line and cast your vote. It matters, and you’ll feel better for it. In the meantime, enjoy this: 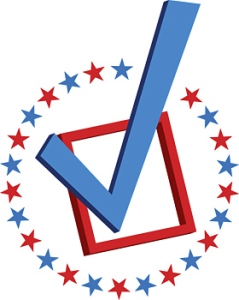 The economy is in the toilet, we’re fighting multiple wars, Sarah Palin still annoys the neck out of me … but all is not dark.

I talked with my 22 year old college nephew the other day and it brought me great hope.  It was probably the longest conversation we’ve ever had about serious things – an hour! – and included quite a lengthy discussion of politics.  His parents are conservative Republicans and he lives in a red state, but he is surprisingly open.  (I know, there’s an implied judgment there but it still was a surprise to discover he was not opposed to gay marriage.)

We talked about Right to Life and that life involves more than unborn babies, it also involves facing the death penalty and taking a life then.  We talked about politics and how I ended up a Democrat, but that I actually do vote for the candidate I think is best for the job, which can (and has) included voting for a Republican.

We talked about how to educate yourself to vote this year, watching the candidates on TV as well as analysis but also reading papers (in print or on the web) to see the words spelled out, summarizing positions on important issues.  And that the presidential candidates and their VP picks needed to be considered as a package because if anything should happen to either Obama or McCain, we’d have a new president and that person had better be prepared to step in and lead.

And we talked about voting itself.  That it’s a priviledge and a responsibility, and that even if you aren’t really sure which one to vote for, you may dislike one more than the other and that gives you your choice.  I told him that I didn’t care whether we voted for the same candidate (although obviously I hope he picks mine).  What mattered was that he take the time to vote.

I felt kind of like a League of Women Voters commercial – but happy that we could have this discussion without any badgering, raised voices, or snippy remarks.  He’s growing up.  Maybe so am I.

What are you THINKING, America??  Voting Michael Johns off American Idol before those screechy females Carly and Syesha?  I mean, c’mon.  Sure, the performance on Tuesday night wasn’t his best and he was wearing one of those weird scarf things that never made a lot of sense.  But he’s Australian and maybe their fashion police insist on it.

What I loved was the voice.  He seemed like a nice guy and he really shone on the rock and bluesy songs.  Michael has stage presence and can really fill up the space as well as the potential to be a great front man.  I want to buy his music.

I don’t want Carly or Syesha and can’t believe they are still around to annoy me when my Michael has gone home.  Not to mention the Davids.  Well, okay, I like David C. even if his performance this week wasn’t his best.  Actually, only one of them performed really well to my mind this week and even that wasn’t overwhelming.  David A. isn’t even on my radar of singers I want to listen to again – it’s like he’s in a high school talent show.  Good voice, sure.  Will I buy it?  Nope.

That’s the ultimate test — what will people buy?  I can’t believe that there as many women left as there are, considering the field of men this year was so much better.  But please, America.   Stop voting for the wrong people.  Wasn’t George Bush enough?

Super Tuesday – thank God we’re moving on from the Super Bowl and back to the craziness that is American politics.

Connecticut is one of the 20 or so states participating in this humongous multi-state primary tomorrow and for reasons that escape me, the candidates seem to actually be paying attention to us. This is unique for me since usually they just skipped trips to Massachusetts. Hillary was in New Haven this morning and Hartford last week; Barack was in Hartford today. I’m not trying to keep up with the Republicans because, frankly, I don’t care. It’s not my party so I don’t have to worry about which of them to vote for.

I do, however, have to decide between Hillary and Barack. There are things I like about each and things that make me squirrely. Mostly I’m thrilled that we have two strong and viable candidates that break the mold from the past, and I know that one of them will be the nominee of my party.

I admit that I’m one of the people who really liked President Bill Clinton, Monica-gate and all (I thought it was a pretty stupid way for us to spend so much time, energy, and money). I’m not sure how he would do as a First Husband and I’m not sure I like the idea of “two for one” this time any more than the last. And I’m really not sure that I want 4 Bush years + 8 Clinton years + 8 Bush years + more Clinton years. That’s too many years with the same two families. We deserve better.

What we really need is for people to get out and vote tomorrow. Don’t stay home and say it doesn’t matter. If you live in one of the Super Duper Tuesday states (and you will know if you do because of the onslaught of political ads you’ve been living with), you need to go vote. Staying home because you don’t like your choice of candidates is cop out. You owe it to yourself, your family, your country, to pick one and vote.