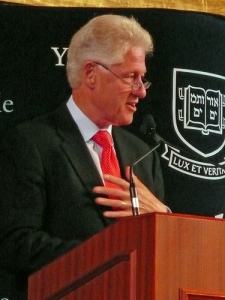 Bill Clinton, member of the Class of 1973 of Yale Law School, came back to campus for a special presentation to the Yale Law community during his 35th reunion this weekend.  Being a good soul, I signed up to be an usher – in part, I admit, in hopes that I’d have a good seat.  I not only had that, I had the chance to shake his hand.   It was totally worth all the standing.

This wasn’t a big political event; Clinton was actually asked to come by a group of students involved in Universities Allied for Essential Medicines.  He spoke to a large hall of gathered alumni, students and faculty about America’s role in the world, including the importance of UAEM’s work on global health. President Clinton told the crowd: “I like [their work] because that is an example of how we turn good intentions into positive changes.”

Clinton was warmly received as he spoke on the future of the country, the economy, healthcare, the environment, energy, and our role in the world.  He gave a rousing endorsement of Obama, and eloquently defended his kind words about McCain as a PERSON (but not as a president), saying, “We have got to stop HATING people just because we don’t want to VOTE for them. It’s poison, and it makes us stop THINKING.” He ended his talk by telling us to do do something that matters, and that makes us happy.

He is a charismatic, engaging speaker and incredibly smart, with a good sense of humor.  And he looks so much older than we remember him in his days as president – but still good looking, perfectly turned out, and with twinkle in his eye (not to mention the Secret Service guys all around him – tho how they are secret when we can all see them is another question).

At the end he came down and walked a line of students and alums (and a few staff, including me).  He shook hands and chatted, and when he got to me, he put one hand on my shoulder and shook my other one — maybe because he saw the huge “YALE STAFF” button that I was wearing.  Or maybe coz I just look like a nice person and I’d been paying attention.  No matter why, I was thrilled.