When I was growing up, summer was clearly defined. It started with Memorial Day and the opening of my grandfather’s beach house and ended with Labor Day, always at the beach with family and cookouts. The clans gathered en masse with adults and kids separating out to do our own things and only coming together for meals.

I still think, come Memorial Day and Labor Day, that I am supposed to be at the shore with my family even though we moved away when I was 16. We usually have a conversation about it, reinforcing memories and tradition, even as we live different lives now.

This year I spent part of Labor Day weekend, not at the shore with family but in New York City with our Frances, taking the train down for the day yesterday. It was my first trip on the Metro North train which is oh so convenient and cheap ($28 for a round trip off-peak hour ticket). By the time we left CT and headed into the city, the train was full of baseball fans off to the Yankees game and extremely loud folks going to the Brazilian Festival. I was grateful to not have to lug a suitcase and to just be going to play.

Frances met me at Grand Central Terminal which is amazing if you’ve never been there. Not many places to sit but beautifully restored and truly a grand space. We had a perfect day to be out exploring and spent our time in Chinatown and Little Italy, armed with cameras and no real agenda.

Street vendors were out everywhere with booths of jewelry, art, tchotchkes, plastic life essentials, and food. In Chinatown that included dried fish which smelled really awful; the fruit was much more appealing. There was a joyous man armed with bubble guns, shooting streams of big soap bubbles and pumping the air with delight. He made us smile and buoyed our spirits.

Most of our shopping time was spent at Pearl River, one of Frances’ favorite stores and now one of mine. They have EVERYTHING, not just stuff for tourists, from beautiful silk garments to exotic spices to paper lanterns and bamboo. Downstairs is where I had the best time poking around looking at pigs and Buddhas and that happy cat with the raised paw that was everywhere, almost like a little army.

We puzzled at the fan display, trying to figure out why some were so much larger than the others. An elderly Chinese lady who spoke little to no English showed us that they were dancing fans and the fluttery extensions rippled gracefully as she moved the fan in dance moves. She was very sweet and shy and charmed us completely. 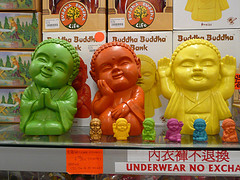 I fell in love with some plastic Buddha Buddha banks – big heavy ones and little bitty tiny miniatures – and bought one of each of the miniatures because, well, they were cute. I had my eye on all things pig and in this Year of the Pig, there was a lot to see and photograph.

We had Thai food for lunch (I adore Pad Thai and have it whenever possible) with a chance to sit down and rest our feet, then treated ourselves to an amazing 46 minute Chinese back rub (aka massage). I have no idea why it was 46 instead of 45 min. but I wanted more more more. Today I’m paying for it a bit with sore muscles where she went very deep but I could feel the knots breaking up so I’m not at all sorry.

Back on our feet and out on the streets, we were spotted by a Chinese man who invited us to a back room with knock off purses. Apparently the better quality fakes are behind these closed doors, not out on the street, so being asked in was a big deal. I just know that I bought two bags I didn’t even know I needed – the leather felt great and who cares if they’re not real Prada?

Our last real stop was at an All Things Italian store with lots of saints statues in the window and inside. Not being a good Catholic girl, I didn’t know who most of them were but I still appreciated the tackiness of the collective display. I’d rather have a plastic Buddha, though.

Then it was back to Grand Central and my train home, down and back in an easy day. I love that I’m close enough to do this often so I can see slices of the city in small installments. Future trips need to include massages and visits to Chinatown, though, which I think can be arranged.

One thought on “Forging New Traditions”